The art of seduction 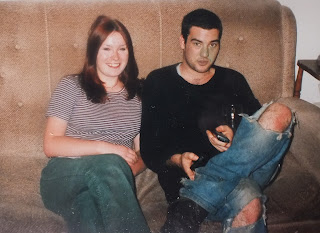 Thirteen years later, there we were. Outside a pub in Soho.

My friend and I had spent the evening concocting a plan to make you mine. After several glasses of pinot grigio, the wine had helped us towards a plan worthy of the nimblest-minded geisha in the West. Invite you round for dinner at the weekend, then ask you to help me put together my new TV table from MFI.

We thought it might make you feel indispensable to me and…well, kind of manly.

I’ve since found out that you’re hopeless with a screwdriver. Manipulating nuts and bolts, and securing bits of wood together, brings you out in beads of sweat and gives you a troll-like demeanour.

As seduction plans go, I’d have been better off getting you to fix my ‘broken’ shower. Then turning it on while you were stood underneath. After turning the temperature dial to extra cold.

And, as I later found out, you were off on holiday that weekend anyway.

Your evening had been spent with an old colleague and friends. You composed a text message that looked like it was addressed to many, but really you just sent it to me. Anybody up for a drink? Your friends were going home and you wanted to stay out a bit longer.

You had just wanted to see me again, before you went away.

My friend hadn’t met you before. What remarkable luck that she’d get a glimpse of this magnificent creature we’d spent the evening discussing. When you arrived, the three of us chatted about music and drank beer. She might have thought you were brilliant; she may have decided you were rubbish. I didn’t care. You were my D, and, from that vantage point in time, you always had been. Right from the moment I spotted you across the grounds of our halls of residence.

Curiosity satisfied, my friend made her excuses. You and I finished our drinks, then left to catch the last train back to our ‘hood.

With my seduction plan thwarted by your impending holiday, I knew I had to do something. Quickly.

We paused outside the pub so you could light a cigarette. I went in for a kiss just as you were about to take a drag. The embers nearly singed my face, and you threw the fag onto the floor. Embarrassed, I tried to pretend the kiss had been an accident. Oops. Sorry, sir; I tripped and my lips ended up on yours.

But you kissed me back. Everything was alright. This arch seductress had triumphed in the end.

That was five years ago from Monday.

We spent this anniversary watching documentaries about Margaret Thatcher. We are children of the ’70s, and there is romance in shared history (even the bits we’re not so fond of). As I watched the backdrop of our early lives playing on the screen in front of us, I thanked the stars for letting our shared impulses that evening hold sway.

And for preventing you from destroying my TV table. Because a memorial to Thatcher wouldn’t have been the same unless shown on a wonky table bought from a once-powerful shop, now buried under the ruin of financial greed.

The blog posts that never were

Is anyone heading off to a snowy destination this

A highlight for us last summer was our trip to Dui

A very happy New Year! I’ve been offline for mos